This collection is chock full of fun facts that may just give you reason to pause....and smile!

Passionate stories of the unique bond between animals and people

Inspiring stories that prove, with a little heart and soul, anything is possible

Watch Five Rescued Turtles Get Reunited With Their Home, The Ocean

Humans weren't the only ones affected by record-setting cold temperatures last winter. In the ocean waters around the American Northeast, animals found themselves in freezing waters that they were unused to, and many of them struggled to survive. Among those animal groups affected by the below-average temperatures were loggerhead turtles. Five of the turtles were found off the coast of Massachusetts, near Cape Cod and Martha's Vineyard, and they were in bad shape: some had hypothermia, and one had no heartbeat. But thanks to months of care by dedicated workers at the New England Aquarium, all five turtles were recently returned to the ocean—and it was so heartwarming!

"Turtles heal very slowly; they do everything slowly," said Connie Merigo, who helped with the animals' rehabilitation.

With antibiotic therapy and other treatments, like fluids and nutrition, the turtles returned to health over the course of several months. The team at the aquarium decided that they'd go one step further in terms of preparing to help other turtles in future cold winters; they attached satellite trackers to the five turtles' shells, which will help researchers learn about their migration patters to better protect the species in coming years. Eventually, the trackers will detach on their own.

Enjoy the sweet scene from West Dennis, MA, especially the speedster turtle who couldn't wait to get back in the water!

Turtles released back into ocean after rehabilitation 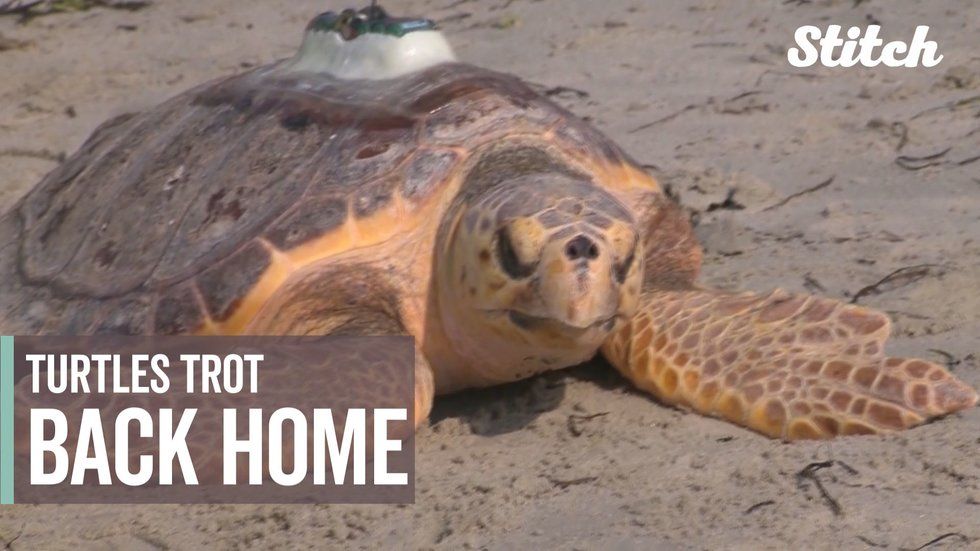 Video via Stitch. If you loved this video, check out more amazing stories on the Heartwarming Animals YouTube Channel, part of the HooplaHa Network!

Series - The Hero In You
Richie Levinson
www.youtube.com

Everyday Heroes Deliver Delight - The Hero In You (S1:E1)

Welcome to The Hero In You – the all-new series from OnlyGood.tv that will inspire, touch your heart, and show you that you can be a Hero too! Hosted by Marysol Castro, The Hero In You highlights individuals and organizations that prove that with a little heart and soul, anything is possible. Sometimes a helping hand or a sympathetic ear are the only super powers you'll ever need.

Ziggy The Pig Is A One Of A Kind, Unique Pet

"Living with a pig is crazy," says Jay Yontz. Jay and his girlfriend Kristin Hartness are pet-parents to a friendly pig named Ziggy—and there are plenty of crazy things about this little family's story!

The Creation Of Us (S2:E1) – Meet Christen and Heather

Christen Samuels and Heather Fazzino both grew up in strong, opinionated, Italian families. Old school. Traditional. This made things a bit more strenuous for these women on their road to becoming a couple. In this first episode of the new season of The Creation Of Us, Christen and Heather share the stories of how they grew up, the people around them who were major influences, and the key moments each experienced that made them realize they were different.

The global refugee crisis is ever-present in the news these days, but the United States has received displaced peoples from all over the world for a long time now. The catering company we'll tell you about today found in this crisis the inspiration for its mission: to train and employ refugee women who are eager to establish new, fulfilling lives in their new homes.

Millennial Woman, Writer, and Actor Thrives While Accepting Her Down Syndrome

The core theme of the recent 2020 World Down Syndrome Day celebration was "We Decide" – a call that "all people with Down syndrome should have full participation in decision making about matters relating to or affecting their lives."

Annemarie Carrigan is a shining example of what can be accomplished when this theme is taken to heart. She is an actor and writer, living with Down syndrome, and her story was shared by Joey Travolta and his company, Inclusion Films, as part of the annual celebration.

These Kids Are Flipping Houses To Help Build Their Community

Reality TV is has a number of shows that highlight the fast paced, rough and tumble world of house flipping featuring adults who specialize in this area. Enter 9 year old Alianna Hines – she is the boss and CEO of Junior Flips, LLC, a company run by kids that takes distressed properties and transforms them into beautifully renovated single family homes in Washington, DC. and Maryland.

Not every kitchen creation comes from a cookbook. Sometimes it's the story behind the recipe that makes it taste that much better! Learn the family secrets that make her creations so special on this brand new episode of "Unwritten Recipes" with Felicia Levinson, an OnlyGood TV Original Series.

Felicia, mother, thespian and comfort cook creator, concocts dishes from the recipes she learned from mother, grandmother and other special family moments. Every dish comes with a story and every one is packaged with love.

This Charity Plants Food and Hope! – Meals By Grace (P2)

Get your Only Good TV Newsletter